What do you see as the role of the 12th Man Foundation Board of Trustees?

Our role is to see that the mission of the 12th Man Foundation is carried forward. We have an outstanding professional staff that does an excellent job and our role is to provide support and oversight for them. In coordination with the staff, during the last year we have overhauled the 12th Man Foundation’s strategic and tactical plan to be very donor-focused. We want our donors to have the best service and experiences because they are the ones who make our mission of supporting championship athletics possible.

What makes Texas A&M and Aggieland special to you and your family?

I am the first in my family to graduate from a university and it was by the grace of God that I ended up at Texas A&M because we had no ties or connections to the school at that time. I met my wife, Becky, here and we married shortly after graduating from A&M. Both of our daughters attended A&M, as did my brother, who also married an Aggie and has two sons that went to A&M. We are maroon through and through at this point. My mother, who is 85, still comes to a couple of football games each year, but if she’s not there she is sure to call me to find out what channel the Aggies are on.

How did you first become involved with the 12th Man Foundation?

We’ve been members of the 12th Man Foundation for over 40 years now. Our major gift involvement started after we saw an article in 12th Man Magazine in which Coach Mike Sherman was explaining the need for a player development center and how important it was for the future of the football program. Becky and I decided that was something we wanted to get involved with and we were excited to be a part of getting that project completed.

What led you to a career in business, and what do you credit your professional success to?

I have always been drawn toward the business world. I think a lot of my success came from my desire to be on the international side of things, dealing with people from different cultures all around the world. I’ve been fortunate enough to travel to over 50 countries through my business ventures.

What is your motivation for making an impact in the lives of student-athletes through the 12th Man Foundation?

I’ve been an Aggie Athletics fan forever. When we were in school, I never missed a football or basketball game and seldom missed a baseball game. Naturally, that continued on throughout my life. During my business career, I was blessed with good fortune which left me in a position to get more involved and give back.

How much pride do you take in the recent opening of Davis Diamond as the new home for Aggie softball?

It was great to see Davis Diamond come to fruition, primarily for the young ladies on the team. We’ve been fortunate enough to be able to make some major financial investments, but more rewarding has been the emotional investment we have with those young ladies. They are true student-athletes and we are extremely proud to be associated with them. It was a great leap forward for the program, not just the stadium which everybody gets to see, but also the training, locker room and player development areas that are really second to none. 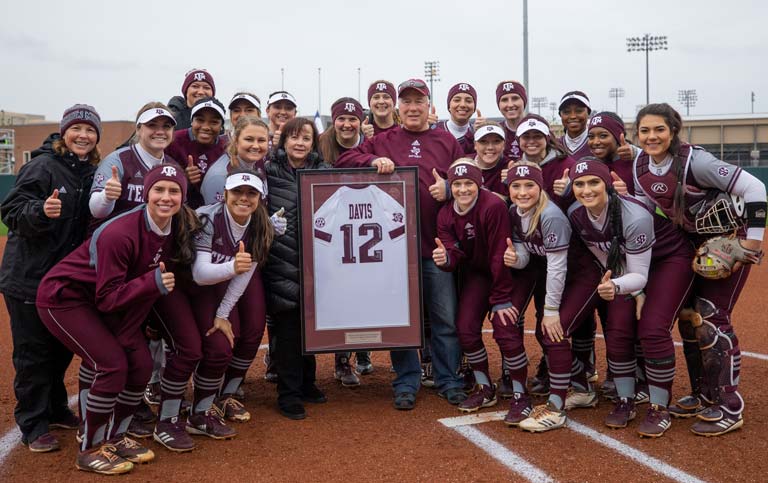 “We’ve been fortunate enough to be able to make some major financial investments, but more rewarding has been the emotional investment we have with those young ladies. They are true student-athletes and we are extremely proud to be associated with them.”